UPDATE
Foreword:
I attended a public school my entire life.  Regardless of public, private, Catholic or Non-demoninational school — all have to wear a uniform.

One of my most favourite colours to wear is grey.  Slate grey.  This is 60% intriguing and 40% amusing to me.  You see, twenty-nine years ago, I stepped into a school uniform for the very first time:  Slate grey skirt, white shirt, grey cardigan (even though it was August) and a black blazer, complete with a carefully sewn on embroidered school badge.  My tie was red and black thick diagonal stripes.

It was a curse and a God-send.

You see, ask any non-assuming Secondary School kid these days and they’d say they’d love to get the chance to wear anything they wanted to school, like the majority of their American counterparts.  If truth be known, the stringent uniform standards had slackened within the first five years after I’d left 6th year in high school.  Girls were suddenly allowed to wear trousers in the colder weather (so, basically, every month but 2 weeks in July if you ask me) and I’d also see open neck button-up shirts with a knotted, loosely draped tie.  It looked fine, but I know if I had done it, I would have been verbally reprimanded.  There had been occasional instances where people in my class would be sent home from school to go change — home being two miles away from high school, just for me.  But I was never sent home, of course.  Non-one drove to school either, the legal age to drive is 17, and by then, most have just months to go before they leave.

Looking back on everything though, I am grateful I had to wear a uniform five days a week for 13 years of my life.  I knew what I was going to wear to school that day, except maybe varying which standard issue skirt style to go for in the morning.  There were no school clothes and play clothes, they were all mine.  My vanilla uniform (with the best intentions) was (supposed) to be taken off when I got home for me to change into my skivvies.  On the flip side, I am on the brink of experiencing this with Ian.

In September he started his second year at pre-school, and, like my own experience in Nursery, gets to wear what he wants.  I would love that he could wear a uniform.  We are up to three pairs of jeans, two pairs of ‘smart’ trousers and a pair of dungarees with the knees ripped out.  I can no longer mix n’ match play and school clothes.  Then again, it definitely trips me out that next August he would be in P1, and very likely wearing a full-blown uniform.  Of course, small kids have it a little easier these days, they can don polo shirts with the embroidered school badge on the left breastage along with the option of the starched white button-choking shirt.  They also have sweatshirts in the matching blazer colour with, right, you guessed it — the embroidered school badge on the left breastage.

Back in my day . . . spit, smack, slap, knee to the groin and the complementary headbutt...

But I’m not bitter, no really, I’m not; because I walked away (mumble, cough) 16 years ago with a memento, a wee shiny thing most others don’t have:  A little blue badge.  This blue badge brought me respect amongst the terror-ridden 1st years (in HS, 11-year-old’s).  I (amongst a dozen or so others, but really, it was all me.  Gillian, if you’re reading this, shut your dirty mouth) was the connection between the staff and the pupils.  We watched out for them, kept them in their queues at the stagnated lunchtimes and helped them to class if they were lost. 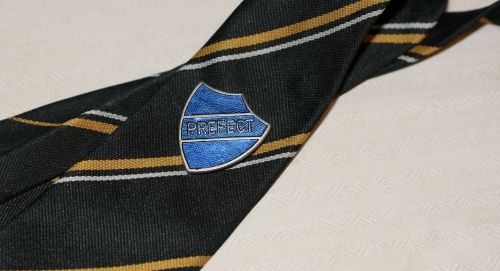 Now, if I could just project my prefect powers on my small children, I would be a happy woman.

And let me just say this, I am very glad my scanner died an untimely death, I am spared from posting a high school photo.

This entry was posted in Daily, Education, Me, Scotland and tagged British Schools, Prefect, Scotland, Secondary School. Bookmark the permalink.